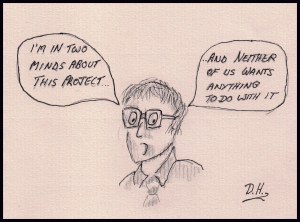 This is a leitmotif. You can only get away from it by scrolling down.

I make no claim at all to be a cartoonist (let alone a real artist). However, some people seem to like my cheesy little (mostly IT-related) cartoons, photos, and cheap sarcasm, so I figured I might start putting them together in the same place. That doesn’t mean you won’t find them elsewhere, though. You don’t escape that easily.

If you like I can has cheezburger or Gary Larson, or XKCD, or secmeme, you’ll be totally underwhelmed by this. On the other hand, if it raises the faintest suggestion of a wry smile, you might also like Parodies Regained, which stays firmly in my comfort zone (i.e. is almost entirely textual content).

I tweet everything I publish via @davidharleyblog, if you really can’t get enough. Be warned, a lot of the other stuff is Very Serious.

[Licensed under Creative Commons Attribution-NonCommercial 3.0 License. See the About page.]

The kingfisher, of course, is self-isolating.

Republican voters: please don’t worry too much that 45 may be vulnerable to side-effects from taking hydroxychloroquine (if he really does): you can’t die of cardiomyopathy if you don’t have a heart to start off with. 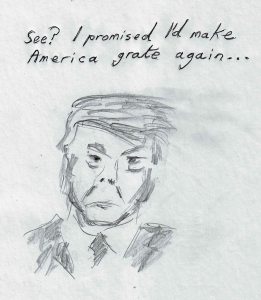 My dreams are often mad, but usually in a pedestrian way that I manage to forget by the time I reach a keyboard. Tonight, however, I found myself telling a Mossad assassin that he would not reach the Commissioner tonight as he was even now on a train to Istanbul. Strangely, I was aware that this would stall the plot since mobile phones had not yet been invented, but proceeded anyway.

In any case, I’m not sure why this conversation was taking place on a housing estate in Shropshire, but I’m sure that Childers or Buchan would not have squandered this opportunity to play a part in the Great Game, on the Big Stage. After all, their authoring opportunities were largely restricted to endeavouring to avoid massive ‘conventional’ conflict across Eurasian borders. If I were to pursue this them in (probably virtual) print this morning, it would probably turn out that the story presaged the last days of the human race. Perhaps all stories do, at this point.

In any case, my progress towards a rational denouement was impeded by my pre-senile bladder, which woke me in order to send me to the bathroom. However lively my dream life may become, it seems that authoring an adventure novel would be an over-ambitious late addition to my bucket list.

David Harley is an IT security researcher, author/editor and consultant living in the United Kingdom, known for his books on and research into malware, Mac security, anti-malware product testing, and management of email abuse.

Harley has worked in IT since the mid-1980s, working initially at the Royal Free Hospital in London. From 1989 to 2001 he worked for the Imperial Cancer Research Fund (now Cancer Research UK), where he eventually moved into full-time security. In 2001 he rejoined the National Health Service where he ran the Threat Assessment Centre. After leaving the NHS in 2006 to work as an independent consultant, he worked closely with the security company ESET from where he retired in 2019, having held the title Senior Research Fellow since 2011.  In 2009 he was elected to the Board of Directors of the Anti-Malware Testing Standards Organization (AMTSO), but stood down in February 2012, when Righard Zwienenberg, president of AMTSO, joined ESET, so that there wouldn’t be more than one Board member representing the same AMTSO member entity.

Most of his writing since joining ESET is available here:

Most of his writing for other magazines, web sites etc. is available from or via the Geek Peninsula blog, as are most of the above writing.

Among his other security-related (sometimes) blogs are:

…it doesn’t mean there are no witches.

Facebook is suggesting that I allow James Patterson to teach me writing. (Well, I suppose he has sold a lot more books than I have.) Apparently I can learn every part of his book writing process.

I wonder if that includes finding a co-author to do the actual writing?

I suppose I shouldn’t be snide about this: it’s obviously working posthumously for Robert Ludlum and Tom Clancy. Thank heavens it never occurred to Barbara Cartland.

Seek and you may find…

Dataholics: the IT addiction
Create a free website or blog at WordPress.com.